Craft has a smart system based on Composer (opens new window) that helps you keep your site and plugins up-to-date.

When an update is available, users with the permission to update Craft will see a badge in the control panel next to Utilities in the global navigation:

Click Utilities → Updates. (You can also get to this view directly from the Updates widget that’s installed by default in the control panel dashboard.)

This section displays updates for Craft CMS and installed plugins, where each version has its own collapsible panel detailing relevant changes. 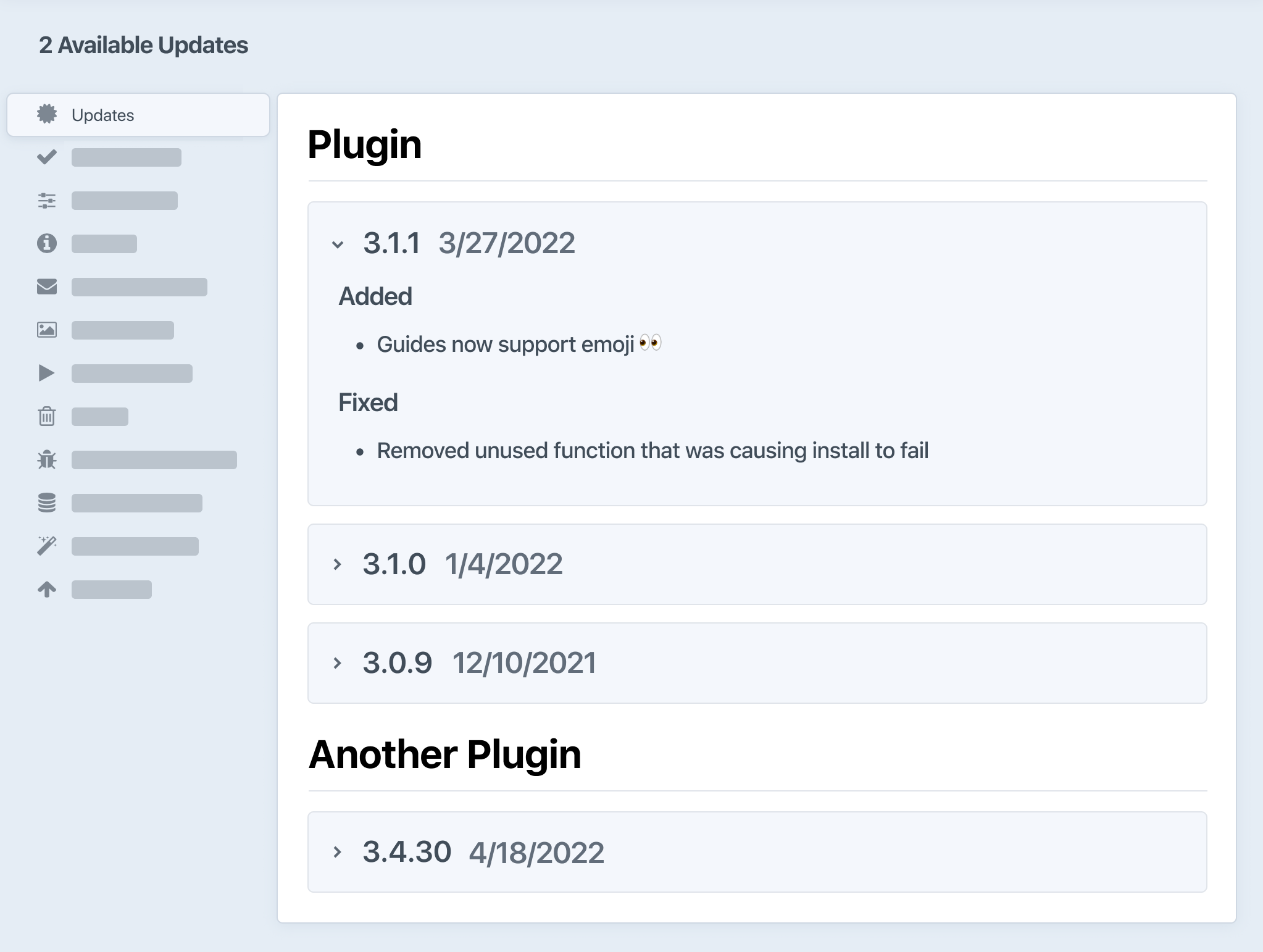 There may be an Update button next to each item and an Update All at the top of the screen, depending on your the allowUpdates and allowAdminChanges settings for your current environment. You can use those to initiate updates directly from the control panel.

Craft’s changelog (opens new window) will warn you of any critical changes at the top of the release notes. While there aren’t usually any warnings, it’s always a good idea to check the changelog and any upgrade guides before updating.

After Craft successfully installs updates, it will run any new migrations.

# Updating from the Terminal

The update console command can be used to update Craft and plugins.

To see available updates, go to your Craft project in your terminal and run this command:

To update everything all at once, run this command:

To apply a specific update, replace all with craft (to update Craft itself) or a plugin’s handle:

You can pass multiple handles in at once:

Craft will install the latest available version(s), unless you append :<version> to the handle:

After an update is performed from the CLI, Craft will apply any relevant migrations.

craft update is mostly a wrapper around Composer—but you can use Composer directly for more control over the update process.

The main behavioral difference is that craft update will always set specific Craft and plugin versions (like 4.3.6 or 1.2.3), whereas Composer allows you to use version constraints (opens new window) (like ^4.3.0 or ^1.0.0) to define dependencies.

When using version constraints, composer.lock will still make sure you get a stable set of packages from composer install. To update all your packages to the most recent versions allowed by their constraints, run composer update. Update a single package by specifying it in the command: composer update craftcms/craft.

If you have used the Craft CLI in the past, composer update may do nothing!

Open composer.json, and look at the packages under the require key—if you see exact version numbers, Composer will never update those packages.

Keep in mind that manually altering constraints can lead to an irreconcilable set of packages—Composer will let you know about this before updating the lockfile. Generally speaking, the “major-version” constraints set automatically when using composer require should continue to work, while protecting your project from

Every time you deploy your project, you should run composer install and craft up to bring that environment’s database into agreement with your packages and their expected schema version.

The same applies when working with teammates! Any time you pull new code into a project, running composer install will guarantee you are working with the same set of packages as your collaborators. If you’re one for automation, you can even have Craft apply migrations and project config at the same time by adding a special hook to the scripts key in composer.json:


This tells Composer that after it has successfully installed packages from a lockfile (typically the result of running composer install), it should check if Craft is installed (@php craft install/check) and if so, run craft up non-interactively to apply migrations and project config. || exit 0 ensures that the command exits nominally, so as not to disrupt other processes that expect composer install to succeed.

When you buy a Craft Pro or plugin license, you are entitled to use that version in perpetuity—or any version that you update to, during the year of included updates. To get the most out of your Craft licenses, run updates frequently!

Sometimes, there are significant changes to be aware of—even in minor versions. In these (rare) cases, we publish a guide in the Knowledge Base (opens new window), and list it here.

The most common changes that fits this criteria are deprecated features. Notices will be accompanied by instructions for updating your code to work with the new APIs. Any features that are subsequently removed in a major release will also be noted in the new version’s upgrade guide.