This document is for a version of Craft CMS that is no longer supported. Please refer to the

When a request comes in, Craft goes through several checks when determining where to route the request.

Here is an outline of what that entails:

The request doesn’t necessarily end after a controller has been called. The controller may allow it to keep going.

There are times when you want a URL to load a template, but you don’t want the URI to match the template path.

A good example of this is dynamic URLs, such as a yearly archive template, where you want the year to be one of the segments in the URL (e.g. “blog/archive/2012”). It would be silly to create a new template for every year. Instead, your best bet is going to be to set up a new Route.

To create a new Route, go to Settings → Routes and click the “New Route” button. A modal window will appear where you can define the route settings: 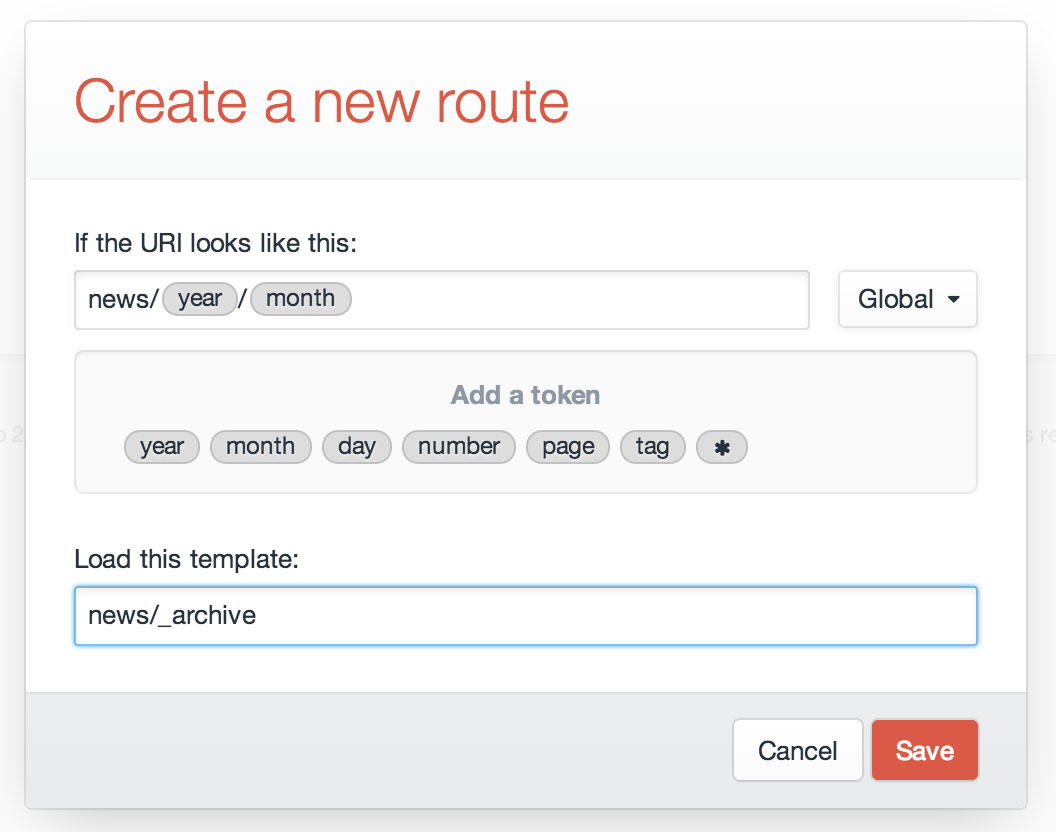 The modal has the following settings:

The first setting can contain “tokens”, which represent a range of possible matches, rather than a specific string. (The “year” token, for example, represents four consecutive digits.) When you click on a token, it will get inserted into the URI setting wherever the cursor is.

So if you want to match URIs that look like blog/archive/2013, you would type blog/archive/ into the URI field, and then click on the “year” token.

Your URI should not begin with a slash (/).

After defining your URI pattern and entering a template path, click the ‘Save’ button. The modal will close, revealing your new route on the page. Now when you point your browser to http://my-project.tld/blog/archive/2013, it will match your new route, and the specified template will get loaded. The value of the ‘year’ token will also be available to the template as a variable called “year”.

The following tokens are available to the URI setting:

If you need to match a URL pattern that’s not covered by the available route tokens and you’re comfortable with regular expressions, you can set up your routes in craft/config/routes.php as well. When a request comes in, Craft checks this file first, and then the routes defined in Settings → Routes.

Note that you don’t need to escape forward slashes; Craft will automatically escape them for you.

If your site is setup with multiple locales, then you can target locale specific routes via:

# Accessing Subpatterns in your Templates

If your route contains any subpatterns, a ‘matches’ array will be passed to the matched template containing them. For example, with this route:

…if you access http://my-project.tld/news/2014/04, your news/_archive.html template will get loaded with a matches variable set to this:

If you specify any named subpatterns, then those matches will also get their own normal variables. For example, with this route:

You can also set your route to point to a controller action, rather than a template: